JUDY WOODRUFF: But, first, America's longest war is over. The final military flight of American troops left Afghanistan just before midnight on what is now Tuesday, August 31, In Kabul after 20 years of war. As of today, the U.S. has airlifted more than 120,000 American civilians and Afghan allies out of Kabul, almost all of them in the last two-plus weeks. But thousands of Afghans who want to leave are left behind, for now. And the deaths of many Americans and Afghans over the last several days haunt this exit. Again with the support of the Pulitzer Center, here's "NewsHour" special correspondent Jane Ferguson.

GEN. FRANK MCKENZIE, Commander, U.S. Central Command: I'm here to announce The completion of our withdrawal from Afghanistan and the end of the military mission to evacuate American citizens, third country nationals and vulnerable Afghans. The last C-17 lifted off from Hamid Karzai International Airport on August 30 this afternoon at 3:29 p.m. East Coast time, and the last manned aircraft is now clearing the airspace above Afghanistan.

JANE FERGUSON: The announcement came from the top American general in the region, General Frank McKenzie, the commander of U.S. Central Command.

GEN. FRANK MCKENZIE: Tonight's withdrawal signifies both the end of the military component of the evacuation, but also the end of the nearly 20-year mission that began in Afghanistan shortly after September 11, 2001.

JANE FERGUSON: The general also noted that both he and his son had served in the country, a generational American war effort now ended. 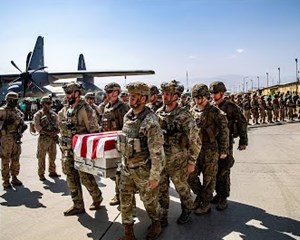 JANE FERGUSON: It was a bloody end, as the Americans finished their flight from Afghanistan, for both the U.S. and Afghans. Blood-stained, the hood of a car destroyed in a Kabul neighborhood Sunday by a U.S. drone strike. President Biden last week promised action against the terror group ISIS-K after they launched an attack outside Kabul Airport that killed at least 170 Afghans and 13 American service members. The Pentagon said Sunday's strike hit a suicide bomber bound for the airport. But reports emerged today that it may have actually been a family. At least 10 civilians were reportedly killed, including seven children. In Washington today, Pentagon press Secretary John Kirby said the Defense Department is investigating.

JOHN KIRBY, Pentagon Press Secretary: If we have verifiable information that we did in fact take innocent life here, then we will be transparent about that too. Nobody wants to see that happen.

JANE FERGUSON: In Kabul this morning, thick plumes of black smoke rose from a burning car, the apparent site from which a rocket attack was launched at the airport. No U.S. personnel were killed. A U.S. countermissile system intercepted at least five rockets early Monday morning, thwarting the attack that shook the area.

JAIUDDIN KHAN, Kabul Resident (through translator): I was inside the house with my children and other family members. Suddenly, there were blasts. We jumped into the house compound and lay on the ground.

JANE FERGUSON: The Islamic State in Afghanistan, so-called ISIS-K, claimed responsibility the attack. The U.S. and 97 countries have agreed to take those fleeing the Taliban after the August 31 deadline. The group insists it has been granted assurances by the Taliban that these people will be able to leave. At Dover Air Force Base in Delaware on Sunday, the remains of the 13 U.S. troops killed in Afghanistan last week were returned home. President Biden and the first lady watched the flag-draped coffins during a dignified transfer ritual and met with the families of those killed. They died Thursday in that bombing at the airport. The oldest was 31 years old. The rest of those killed were in their early 20's, and many were just 20 years old, dead in the last days of a war that started when they were babies. For the "PBS NewsHour," I'm Jane Ferguson in Washington.